Upon arrival in Casablanca, the economic capital of Morocco, you will be met by your driver/guide.

Enjoy a driving visit of Morocco’s largest city and visit any areas of interests (optional).

Depart for Rabat, the capital city and residence of the King and visit La Tour Hassan, Mausoleum and the King’s Palace.

Dinner will be served at a local restaurant; your first taste of Moroccan cuisine.

After breakfast, depart for Meknes for a tour of this small but interesting Imperial city. Wander through the small alleys into the medina, where you will be welcomed into a traditional house (Dar) for your first cooking class focusing on traditional Moroccan food.

The tour then heads to the 2000 year old Roman ruins of Volubilis, where you’ll get a picture of life during the Roman Empire.

Finish your journey to Fes, with dinner tonight at your riad.

After breakfast, begin your guided tour of the medina, one of the world’s largest walled cities. Explore the narrow streets lined with fresh fruit, mounds of spices, intricately woven Berber carpets and many other art objects of Morocco. A visit to the King’s Palace, the tanneries, and potters are just a few places you may experience.

Lunch will be in a traditional restaurant in the medina.

After lunch return to your hotel, and time for a rest before dinner at a local restaurant.

After a traditional breakfast in the riad, you will have a full day cooking experience in Fes.

Visit the local vegetable market to purchase the necessary ingredients for the day’s meal.

Return to the riad to learn the art of Fes cooking. Lunch to follow based on your efforts.

Dinner will be served in one of the local restaurants of the medina. 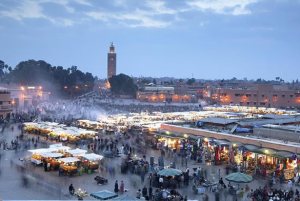 After an early breakfast, depart for Marrakech. The beautiful drive will take you up into the Middle Atlas Mountains and along the base of the High Atlas Mountains.

Once in Marrakech, you will check into your hotel and depart for the famous Djemaa el-Fna, one of the center attractions of Marrakech. Coming alive at night with the local storytellers, entertainers and mouth-watering barbeque pits, the square is enticing, well worth a visit. A quiet cup of tea on the terrace of an adjacent café provides a spectacular aerial view of the bustling square.

Return to the riad for dinner and overnight.

After breakfast, a guided tour of Marrakech, the southern pearl of Morocco. Discover the Palace of the Bahia, the Saadian Tombs and many other hidden treasures.

After lunch, continue to the magnificent Koutoubia Mosque and the town square.

The tour will conclude with an exploration of the souk (market).

Dinner will be served in the famous square at a local restaurant.

Overnight at the riad.

After a traditional breakfast in the riad, depart for a small Berber village where you will learn to cook as the Berbers do.

Whether you are learning to bake bread in a clay oven, cooking tangine over a charcoal fire, or brewing mint tea, this experience is nothing like you have ever done before. Back to the basics of cooking!

Return to the riad for dinner and overnight.

Today visit Morocco’s most popular and picturesque fishing town, Essaouira, located on the southwest coast of Morocco. Many of the country’s wood carvers and artists make Essaouira their home.

Lunch on your own.

In the afternoon, your final cooking lesson, where you’ll learn to cook another wonderful traditional Moroccan meal.

Tonight’s dinner will be served in the riad.

Your last day of travel will take you back to Casablanca following breakfast.

Depart Essaouira for Casablanca with a stop at El Oualidia.

Drive along the coastline to El Jadida to visit the citadel and see the underground cistern.

Continue on to Casablanca, where you will spend your last night in the country. Dinner will be served in the hotel.

Breakfast and check out.

Transfer to the airport for departure.

INCLUDED IN THE 9-NIGHT TRIP

This tour includes four cooking classes, each totally different in their styles; from cooking in a traditional dar (house), to cooking over the charcoal in the Berber village. Your classes will be taught by a number of different chefs, each with vast experience in Moroccan cuisine. Each of our teachers speaks fluent English and French, and their establishments are licensed by the government.