Our Morocco’s Imperial Cities Tour (Fes, Rabat, Casablanca, Essaouira, Marrakech) takes you to the Imperial cities of Morocco. No two cities are alike.  You will take in the ancient medina of Fes, historic Meknes, the French influenced architecture of Rabat alongside its walled ramparts, the commercial centre of Casablanca, and Marrakech with its famous Djemaa El Fna, medina, palmeries and surprisingly tranquil and cool gardens.  Travelling down the Atlantic Coast through small fishing villages, with an overnight stay in relaxed Essaouira gives you some welcome respite from the busy cities.

Our Morocco’s Imperial Cities Tour can be modified from 5-12 days or more depending on your time and what you would like to see.  A similar tour can also start in Marrakech and end in Fes.

Upon arrival in Fes, you will be met and transferred to your Riad.  Relax and settle in. Overnight in Fes. 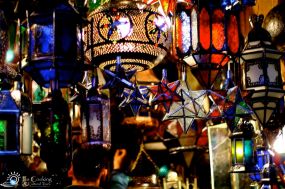 After breakfast explore Fes, the most ancient and holy of the Imperial cities.  Your cultural and historic tour will take you through the 2000 year old living medina; a labyrinth of narrow lanes alive with markets and souks, craftsmen, donkeys and mules transporting their loads.  Visit the Attarine and Bou Anania Medersas (Islamic universities), the Nejjarine fountain, the Moulay Idriss Mausoleum, and the Karaouine Mosque.  Finish your tour with a visit to Fes Jdid, and the revered Merenid Tombs for a spectacular panoramic view of Fes.  Overnight in Fes. 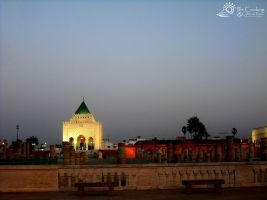 Depart Fes.  Stop in the Imperial city of Meknes, visiting the medina which is surrounded by a triple thickness of 40km long walls which preserves one of the most beautiful gates in Morocco; the Royal Stables of the Alaouite Sultan Moulay Ismail, and the Jewish Quarter.  Continue to the Imperial city of Rabat.  Your sightseeing in Rabat will include the Mechouar (the ramparts and walls surrounding the Royal Palace), the majestic Mohammed V Mausoleum, the Hassan Tower and the Oudaya Kasbah, overlooking the Atlantic Ocean and offering fabulous views, as well as being home to Moroccan artisan galleries.  Overnight in Rabat.

Depart Rabat.  Continue to Casablanca, Morocco’s commercial capital and largest city.  Visit Mohammed V Square which lays claim to some of the city’s most impressive architecture, the majestic Hassan II Mosque, the Habbous District, the central market, and the residential districts of Anfa and Ain Diab, famous for their gardens, beaches, terrace cafes and restaurants.  Overnight in Casablanca.

Depart Casablanca and continue to El Jadida (small port city, formerly controlled by the Portuguese which is now a UNESCO World Heritage site), Oualidia (a small seaside village with a protected lagoon, estuary, and wild Atlantic Ocean all right on your doorstep), and Safi (the centre of sardine exports and famous for its pottery).  Arrive in Essaouira, a UNESCO World Heritage listed city.  This windswept fishing port, with broad beaches and ancient walled medina with ramparts built into the cliffs has long been a popular destination. With its relaxed feel, take in the small but bustling medina, stroll along the ramparts or beach, or visit the port to see the daily catch.  The Gnaouas Music Festival is held in Essaouira in June.  Overnight in Essaouira.

Depart Essaouira for Marrakech.  A relaxing drive lined with argan oil cooperatives will take you to Marrakech.  Visit the famous Djemaa El Fna Square, the centre square of the medina which comes alive at night with local storytellers, musicians, entertainers, snake charmers and the scent of delicious food being grilled over hot coals.  Overnight in Marrakech. 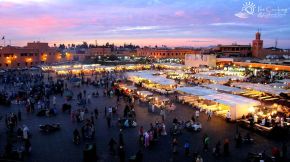 Explore the famous city of Marrakech, the ‘southern pearl’ of Morocco, and second oldest Imperial city which has for centuries been an important stop for traders and travellers.  Your tour will include the Menera Gardens, the famous Jardin Majoralle, the Bahia Palace and the Saadian tombs.  Visit the Koutoubia Mosque, with its 77 metre high minaret dominating the centre of Marrakech.  Continue to one of the centre attractions of Marrakech; Djemaa el-Fna, the famous UNESCO World Heritage Site which is one of the main cultural spaces in Marrakech.  Relax at one of the many cafes surrounding the square to take in all the sights.  Continue on and explore the varied and colourful souks.  Complete your memories of Marrakech with the Fantasia Moroccan dinner and cultural show.  Taking place in the heart of a palm grove, you will dine in caidal tents, and be entertained by musicians, dancers and amazing horsemanship.  Overnight in Marrakech.