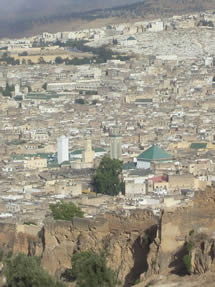 Fez was founded soon after the Arab invasion of North Africa and Spain at the end of the 8th century, and is the most ancient and holy of the Imperial cities.  It was founded by Moulay Idriss, the great-grandson of the Prophet Mohammed.  Moulay Idriss, a charismatic leader, died in 791 and left his son Moulay Idriss II to establish Fes, the new capital.  Since its foundation, Fes has experienced a long history of transitions between dynasties and protectorates during which the Fes Medina underwent many changes and growth. 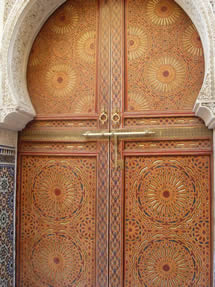 Today, the Medina of Fes, a UNESCO World Heritage site remains one of the largest living medieval cities in the world.  We say “living” because it is still very much alive.  More than 156,000 people live in the 9,000 streets of the Medina amongst some of the greatest historical monuments and architecture in the world.  Guided through the 2000 year old medina, with its never-ending labyrinth of narrow lanes, alive with markets and souks, potters, charcoal burners, goldsmiths, tanners and weavers practicing their ancient trades, donkeys and mules transporting their loads, you will feel you have stumbled into another time.

Visit the Attarine and Bou Anania Medersas (Islamic universities), the Nejjarine fountain, the Moulay Idriss Mausoleum, and the Karaouine Mosque.  Other sights include a visit to Fez Jdid, and the Mellah (Jewish quarter) which has a reputation for some of the finest ironwork in Morocco.  The revered Merenid Tombs provide you with a spectacular panoramic view of Fez.  Provoking all of your senses in ways you could never have imagined, memories of your time in Fez will linger forever.

For a selection of
Day Excursions
from Fes click here.

For more information about Fes:
Things to do
Shopping
Trip to the Souk